It's been a crazy past two weeks. I'm just happy to have completed two consecutive art shows between writing and re-shuffling things in the studio while also getting a chance to hang out with some great UFC fighters again at their party in Mississauga during their brief weekend in town. It was great to spend time with Shonie again, along with some old familiar faces. While I'm not a big fan of the attitude surrounding the sport, I have a great deal of respect for some of the fighters who are so down to earth despite their celebrity status and talent. The beauty of the art or sport of grappling is in its fluid strength rather than brute strength since mere brute force isn't the only determining factor of victory on the mat. I couldn't quite remember where exactly I first read the quote that was partly the subconscious inspiration behind the painting below. Digging up my old yellow-paged copy of the Tao Teh King by Lao Tzu, I found the passage I bookmarked years ago:
"In life, man is soft and tender,
In death he is rigid and hard.
In life, plants and trees are soft and pliant.
In death, they are withered and tough.
Thus rigidity and hardness are companions of death.
Softness and tenderness are companions of life.
That is why the soldier who trusts only in strength does not conquer.
The tree that relies on its strength invites the axe.
Great strength dwells below.
Softness and tenderness dwell above."
(From the Tao Teh King by Lao Tzu)
Gotta love book sales! If I have a bigger weakness than bookstores it's gotta be discount book sales. There's a certain charm about used books from old bookstores. There is a certain mystery about them that make you wonder about their previous owners and how they could have let such treasures go. I wonder how many hands they have been passed through and whether or not those people are still alive. There's a dedication in this one which reads, "To Rupert on his 26th birthday, from Cedrick," dated August 1974. Rupert will be 61 this August if he's still alive. He received this book when he was just a little older than I was when I bought it as a teen. I wonder what he has gained from reading it and whether or not it had a major impact on his outlook in life. In either case, I'm grateful for it being sent my way. Below is what is currently my smallest painting on canvas which is hanging at Ben Navaee Gallery's Small is Beautiful show.
Gentle Strength 6" x 6" Acrylic on canvas 2009 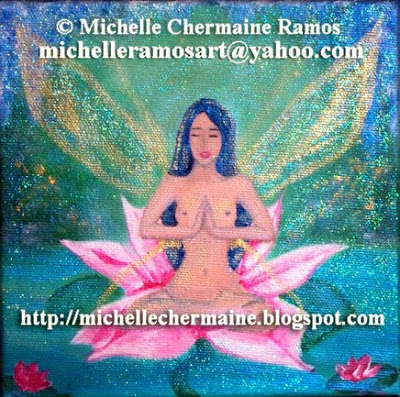 The lotus flower has many symbolic links in Asian religions as a symbol of enlightenment and transformation. Its association with birth and rebirth is due to its nature of opening its petals to greet the sun at sunrise and closing them after sunset.
As a symbol of triumph over hardships in life, the lotus begins life as a small flower hidden deep in the bottom of the pond, its beauty obscure, its strength unapparent in the mud and murky water, until it rises above the surface to bloom with all its beauty.

Its stem anchors the flower firmly in the ground so it is not easily washed away in a storm, representing fortitude as well as our ties to our personal roots and past while the flower represents the fruit of our labour. As the lotus bud had to struggle to rise above its humble beginnings to transform into an object of beauty, so is the human spirit beautified and made stronger with each challenge it overcomes.

Dragonflies are associated with many different meanings depending on cultural beliefs. The Japanese see them as symbols of strength, courage and happiness as well as martial success due to the similarity in the sound of the word "dragonfly" and "victory" in Japanese. Fragile, gentle, yet powerful in its flight as it gracefully darts in the air devouring other insects and peacefully hovers above water at other times, the dragonfly can be viewed as a symbol of gentle strength. As a creature that starts its life in the water to soar as a creature of the air most powerful in the summer with its wings reflecting the light of the sun, it symbolizes change and the self knowledge that comes with maturity.
Posted by Michelle Chermaine Ramos at 7:16 PM

Michelle Chermaine Ramos
On Arts & Culture:
I am a self-taught artist based in Toronto specializing in potraiture and symbolic fantasy art. I enjoy networking and being active in the local arts and culture scene and have also modeled in the fashion industry for runway, print and TV.

On Writing:
As a freelance dating writer, I write relationship advice articles for guys from the female perspective and for girls as a girl who's always been one of the boys. I guess one might say I operate as a double agent. I also get to review the best venues and events for couples to enjoy fun dates in Toronto.

On Life:
I strive to live a multi-faceted life by learning new things and overcoming new challenges day by day.